There are certain factors everyone attributes to productivity, but did you know, with just the flick of a switch you can make a significant impact on your overall health, well-being, and productivity? Believe it or not, the type of bulb and temperature of your office lighting can have a tremendous effect on your team’s productivity. However, when designing a space, most companies don’t put much thought into the types of lighting they install and its impact. The focus is often more around whether or not there is enough lighting to properly see what you are doing, and which is the most cost-effective, not why specific lighting is better than others.

Over the years there have been several different studies conducted examining the different effects lighting has in the workplace and the results speak for themselves:

So how can lighting impact productivity?

For optimal lighting there are a few factors to consider when looking to increase productivity:

Natural lighting – There’s something to be said about the benefits received from natural lighting, including more sleep and physical activity and an overly better quality of life. With such positive results, it is important to incorporate natural light into the office environment design, when possible.  A trend we are often seeing is placing the offices within the core of the space and placing the open workstations at the windows.  This typically allows more employees direct access to natural daylight.  Other companies have left the offices at the perimeter and provided either large sidelights or glass wall and door systems to allow the natural light to flow into the open areas.  There will always be situations where this may not be achievable, for instance, in a space that has a large floorplate and no matter the openness of the environment, the natural light just can’t reach into the core.  Obviously, all work environments will rely on artificial lighting, some just more than others.

Artificial lighting – Depending on when a work environment was built out, you may see one of a few different lighting types, a few examples being fluorescent, incandescent, or LED.  The current lighting trend is utilizing LED technology both for energy savings, but to also meet the newest building codes.  These fixtures have come down in cost significantly over the years so the switch to LED is not as burdensome to the budget as it was in the past.  These fixtures are continuously introducing new designs that allow a space to provide unique applications whether for aesthetics or to enhance general lighting.

Additionally, a study published by The New York Times suggests that for the highest level of productivity in a traditional office space, the best alternative to natural light is LED, which emits more of a white light. However, the type of business and workstations in your office can have an impact on your lighting selection. In an office where computers are frequently used, the quality of light may be different than that of a medical setting.   Below are a few devices that you can couple with the light fixtures to provide more flexibility:

Light Temperature – With the different types of lighting, several lighting temperatures make a significant impact on the overall mood and productivity of staff. When talking about the temperature of a light source, the unit Kelvin (K) is used, which is not to be confused with the actual heat that the bulb emits. * 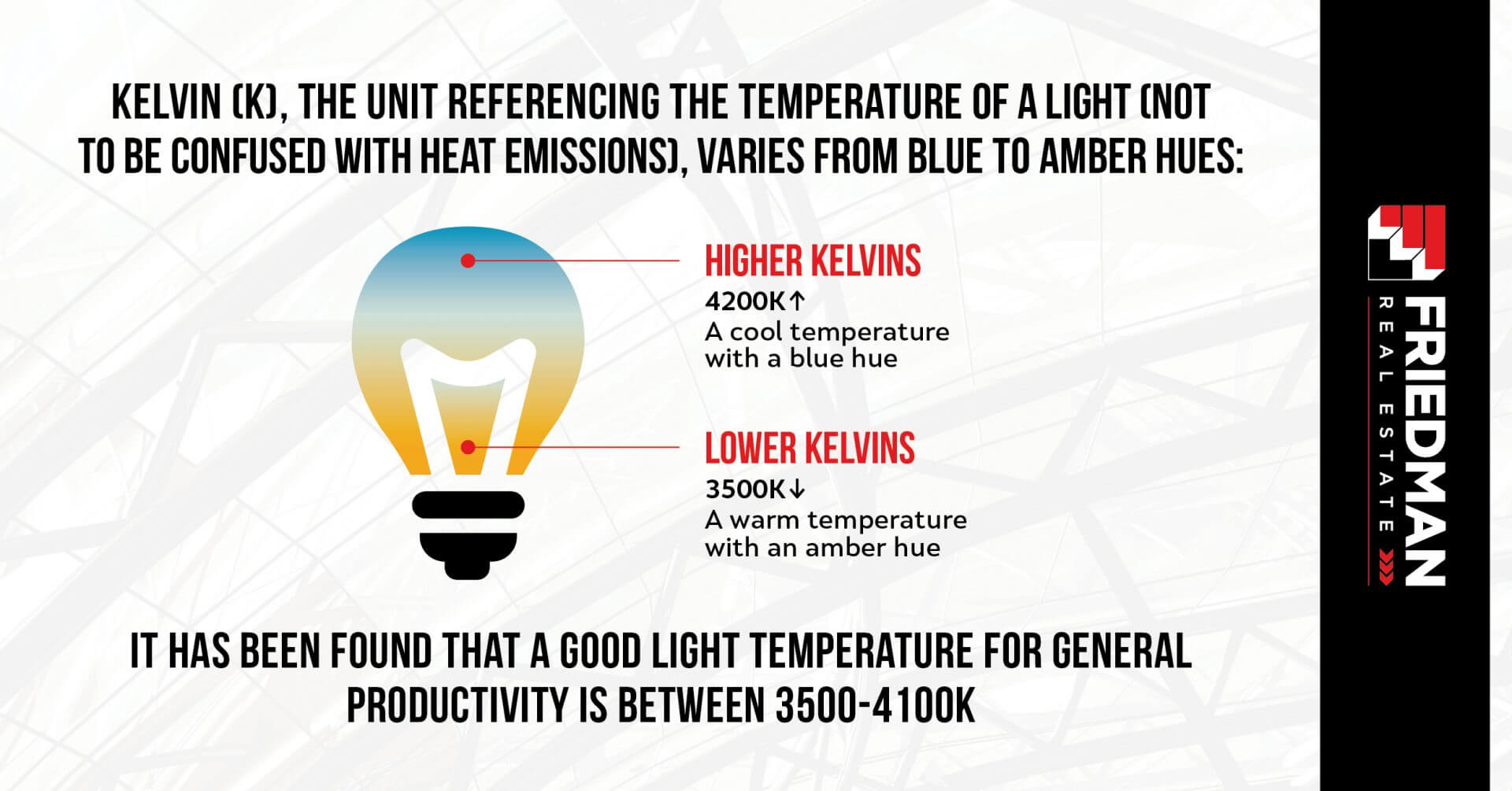 When it comes down to determining which temperature is best for any given office space, a good middle range is anywhere from 3500-4100K. Studies have shown that general productivity is found when more of a white hue is given off in the office.

Lighting can be just as important to some of your employees as the seating you provide them.  The above are high-level concepts that can alter the work environment allowing more flexibility in the lighting capabilities, as well as, increasing productivity.  When in doubt, utilize an LED technology as many manufacturers are eliminating their fluorescent offerings, which could cause a problem in the future if you see yourself expanding in addition to the energy savings that LED technology provides.