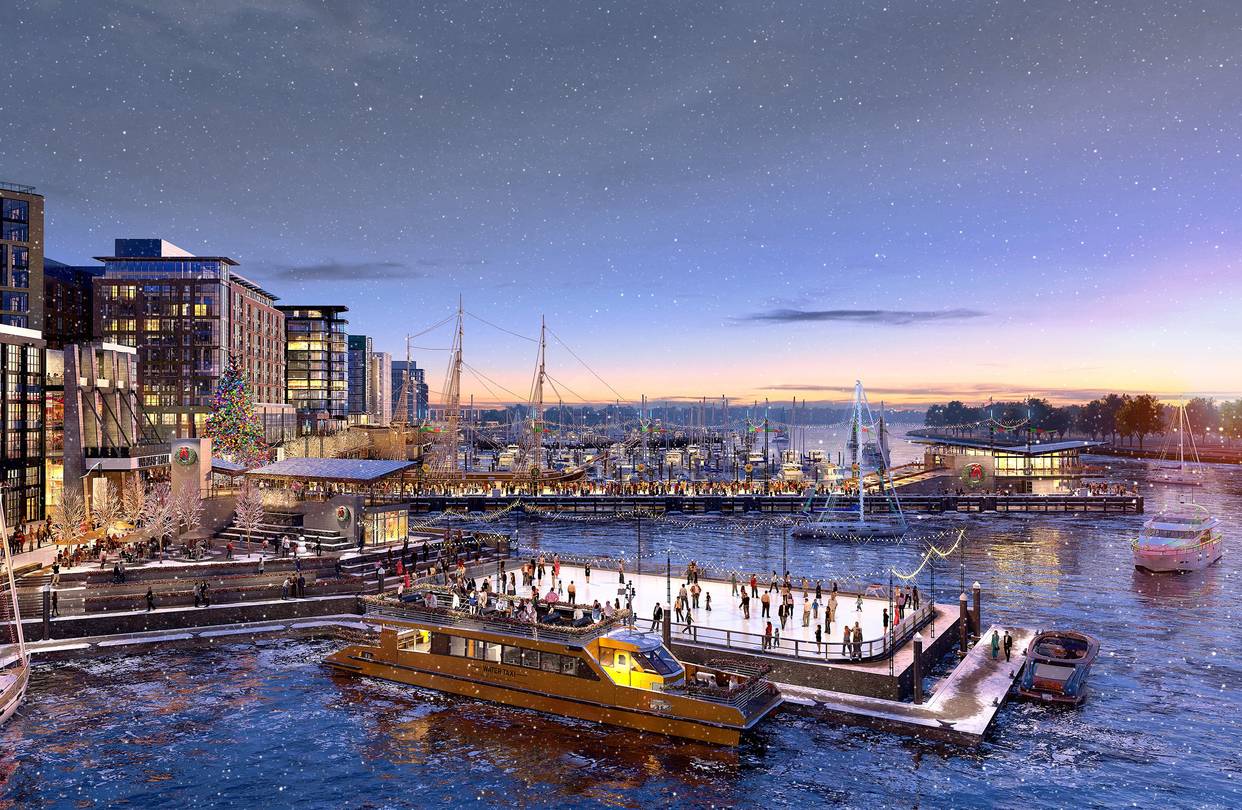 Rendering of an ice skating rink on a pier at The Wharf in D.C., a $2 billion waterfront mixed-use development by Madison Marquette. PHOTO: THE WHARF DC

Landlords of open-air shopping centers and mixed-use property developments are trying to take the chill out of the air by adding outdoor entertainment programs, in hopes of attracting more shoppers in an era of declining foot traffic.

Come autumn, ice-skating rinks, fire pits and programmed entertainment such as tree-lightings will beginning popping up in open-air centers across the northern and central U.S., landlords say.

Federal Realty Investment Trust , FRT +0.53% a Rockville, Md.-based retail center landlord, plans to install a 6,600-square-foot outdoor ice-skating rink at its open-air center in Baltimore next month that is scheduled to open in mid-November.

The rink at The Avenue at White Marsh will be its third. Federal Realty, which owns mixed-use shopping center and apartment complexes in the suburban Washington, D.C., market, already has two ice-skating rinks that offer lessons and can be rented out for birthday parties and corporate events through February.

While shopping centers typically attract shoppers focused on transactions during the fall and holiday seasons, more landlords want to create destinations for the community that might not be entirely focused on buying something.

“You can still have a vibrant place even in the winter time,” said Don Briggs, executive vice president of development at Federal Realty. “Planning, design and then the right programming is key,” he said, adding that outdoor dining areas could be enclosed in the winter time and installing gas heaters helps extend the time customers spend in its premises.

Brookfield Place New York, a luxury shopping center in lower Manhattan, will install an ice-skating rink on the waterfront plaza this winter with programs run by former U.S. Olympic skaters.

The center has attracted New Yorkers and visitors with “high-caliber, year-round activations and events,” said David Cheikin, executive vice president at Brookfield Properties. The rink at Brookfield Place has been a “particularly fun and popular draw during the winter months for the past four seasons, further enlivening the complex and attracting people of all ages seven days a week,” he said.

The moves come as bigger shopping center landlords are investing more to cater to changing consumer lifestyles as shoppers handle more of their transactions online.

The strategies don’t have to be limited to retail real estate. Publicly listed open-air center developers such as Federal Realty, Regency Centers Corp. and Kimco Realty Corp. have been focusing development efforts on high-growth markets with transit links and are including some residential property development in the out-parcels as well.

With online shopping on the rise and apparel companies closing stores, landlords are bringing in more restaurants, entertainment and other types of tenants that are focused on recreation that would draw communities.

The downside for owners is less space to draw rental revenue. The areas can also be expensive, especially when there are sizable fountains or rinks to build and operate.

“You’re giving up that land you can build on to get rent,” said Stephen Coslik, chairman of Woodmont Co., a Fort Worth, Texas-based retail property services, brokerage and asset management firm. “It’s all about the experience, whether they’re fire pits, music venues, play areas for kids. The view is: It will bring people to the center.”

Many landlords with big properties can afford to install outdoor rinks, but those running smaller centers often are on a tighter budget, especially because tenants typically don’t chip in for such collective marketing expenses.

“A lot of it is tenant relations,” said Jeff Donnelly, an analyst at Wells Fargo.

While many centers already have grocery stores to draw shoppers daily, property owners have become more aware of the need to ensure their centers remain thriving.

Located adjacent to the National Mall, the project, known as the Wharf, will have 10 acres of parks, open spaces and civic areas, as well as a fire pit and a temporary ice-skating rink on two of its three piers. Madison Marquette will also organize free concerts and fireworks at its expense.

“Over time, we’re actually interested in working with our tenants so that they become part of the programming,” said Amer Hammour, chairman of Madison Marquette. The events could eventually become profitable for the people who stage them, he said.